I haven’t played golf (or, as my Dad used to say, “shot golfs”) in about two years. I didn’t even start playing until my mid-thirties, and I rarely played more than a few times a year. 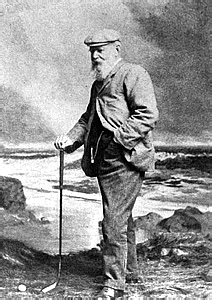 This is no recipe for proficiency (or even adequacy), of course. I probably spent more time playing basketball in one month during high school than on golf for my lifetime. But basketball is no longer an option due to creaky knees, and exercise for its own sake is drudgery. I try to work out at least a few times a week (including referee duty), but I need some kind of distraction while I’m on an elliptical machine. Whether it’s podcasts, magazines, or listening to Jack speculate about the weight of other seniors, I have to have something else to think about. Something other than finding an excuse to get off the machine.

Anyway, I’ve been meaning to get back into golf, but it seems there’s always a conflict whenever friends invite me to play. Last week I hit a bucket of balls to see how far my skills had atrophied. I wasn’t too disappointed with the results. I hit the ball square about half the time, and most of my drives were fairly straight. (At least, range straight. I’m easily deluded into thinking a ball would have been right down the middle of the fairway, as long as my shot doesn’t endanger golfers on my right.)

On Friday, I went alone to a par-3 course to see if I can avoid abject humiliation on the links. I was encouraged, though I have to say conditions were perfect. Empty course, cool, sunny weather, and low expectations. There were no holes-in-one, no 250-yard drives, and no thirty-foot putts. But I did chip one in with a pitching wedge, drive a couple of greens on short holes, and sink a couple of long-ish, bend-y putts.

I know I’ve said this before, but I may have figured out a couple of things about my swing. I think I’m ready to expose my game to the snarky comments of friends. It can’t be any worse than my poker game, right?

The first harbingers of fall arrived last week. First was the Fear and Loathing Athletic Club (FALAC) Fantasy Football League pre-draft meeting at Victory Field. Then on Friday we completed our 23rd fantasy football draft. (There’s been some loose talk about moving the 25th edition to Vegas. The usual crowd of degenerates is in favor of that plan. Including Gan, who isn’t even in the league.) I once again entered the evening determined to get running backs early and ended up with really good receivers. I didn’t even draft a quarterback until the ninth round, so we’ll see how that works out.

We also went to the last two Indianapolis Indians home games of the season. (We usually catch the last series of the year in Louisville, but for some reason the Indians finish up in Toledo for 2017.) We had our grandsons Sebastian and Liam with us for both games, and they had fun. (Meaning they liked playing in the grass berm and eating popcorn and ice cream.) 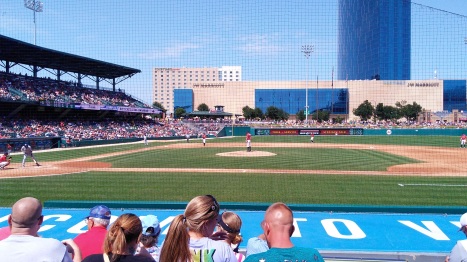 Every year I get more wistful at the end of summer. There are a lot of great things about autumn in the Midwest. Fall festivals, lower humidity, apples. And the approaching winter isn’t even as big of an issue for me anymore, since I don’t have to drive to work. But I guess pulling up zucchini vines and tomato plants reminds me of rapidly advancing old age.