My current score in MLB’s “Beat the Streak” is zero. I did get as high as eleven (“you see, most blokes will be playing at ten”), but the last week or so has been brutal. Jose Ramirez hits over .400 for thirty days, then goes 0-3 against a starter with an ERA of 9.35. Marcell Ozuna hits .366 at home, but is hitless in four at-bats against the Mets’ Robert Gsellman (ERA of almost 8 on the road, backed by one of the worst bullpens in baseball).

For July, I’m revising my strategy. I realize I’m working with a small sample size, but so far it looks like bullpen batting average isn’t as relevant as I thought. I also added “batting average over last seven days” as a metric and discarded home/away batting average.

For today (July 1) I’m going with Ramirez (hitting .367 over the last 30 days) and one of my favorite players in MLB (Andrew McCutchen), hitting .533 over the past week. Gan is going with two players from the same team (Cano and Gamel of Seattle), while John is sticking to NL players with Votto (Reds) and Turner (Dodgers). If my fortunes don’t turn around soon, I’m just going to make selections based on my Bob Uecker Magic 8-Ball.

It’s been a long time since I cashed in our monthly poker tournaments. (In April I played a tournament at the Moose Club on a whim and got second place for a couple hundred bucks. But I laid a brutally bad beat on a guy to make the final table. I had something like ace-jack offsuit against his ace-king suited and made a straight on the river to bust him out.) Some time ago, we started a regularly scheduled tournament where part of the money goes into a fund that accumulates for a year before going to the “season champion”. Players get points inversely proportionate to their finish in each tournament. So if fifteen players show up for a game, the winner gets fifteen points, and the first player eliminated gets one. After the tournament, most people stick around to play a cash game.

In the second or third season, I decided to focus less on drinking beer and more on the actual poker. I ended up winning the league, and assumed I had pretty much figured the game out. Since then, I’ve won only one or two tournaments, and usually bust out well before the money bubble. (We usually pay the top two or three.) I can say that I’ve taken a few bad beats, but so can everybody else. There’s obviously something I’m not doing as well. Either that, or I ran sick good when I was winning.

If you play with the same guys all the time, attentive (or at least sober) players will recognize your tendencies and adjust their strategy to take advantage of that knowledge. I think by now everybody realizes that when my stack gets below a certain point, I’m playing almost any two cards in position. They also know that early in the tournament, I play pretty tightly and will lay decent hands down to a big bet.

The problem for me is that I really believe that, in general, that’s the right way to play hold ‘em. That stack size and position dictate your play to a greater extent than your actual cards. One guy (who may or may not read this blog) plays very conservatively, and has been having results similar to mine. Another guy (who also plays tight) has been crushing the game over the past year. So I know I have to make some changes, but I’m not sure which way to go. It’s always tempting to start playing more hands, get involved with more pots and increase bluffing. But I think that’s a long term losing strategy. And, as the wise old players say….it’s not a bunch of poker sessions; it’s all one long session.

A friend of mine passed away suddenly a few years ago, but before that he gave me a copy of 100 pages or so of his poker wisdom. He included his own observations and reminders, along with quotes from famous players and writers. The content isn’t all that innovative or ground-breaking, but looking it over usually helps me re-focus on the important stuff. 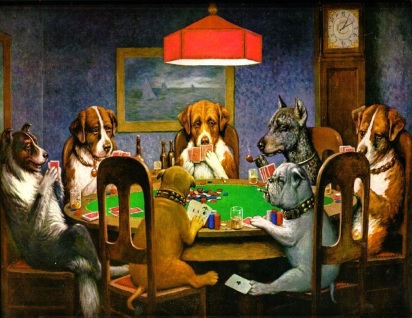 I can’t make the July game, but I’ll be there in August. Poker night guys….if you’re reading this, ignore everything I said. Just know that I’ll play big pots with gutter ball straight draws every time.