I used to cover minor league baseball as a stringer for several different newspapers. That market is almost gone now, mostly due to consolidation of media companies, the internet, and the declining interest of Gannett Corporation in publishing anything besides advertising.

It was a fun gig while it lasted. At its peak, I covered 30-40 games each season. I’d show up at the press box in time for the pre-game buffet and settle into one of the best seats in the house. For a couple hours I’d watch baseball and joke with the other sportswriters, then file a 10-12 inch game story. After I hit “send”, I’d grab a beer from the refrigerator and watch the grounds crew work on the field in the empty ballpark. Then I’d drive home and bill the newspaper I was working for $75-$100.

One of my least favorite parts of the process was interviewing players. Game stories are pretty dry and boring without quotes, so even if the game ended at deadline, the editor usually gave me a 10-15 minute extension to get comments from the participants. Which was the worst of both worlds. Not only did I have to run down to the clubhouse and back, I’d have to desperately try to find somebody with something interesting to say in only a couple of minutes.

With few exceptions, baseball players are notoriously bad interviews. Every sportswriter I ever asked rated them at the bottom of the four major U.S. sports. (The consensus is that football players are next worst, then basketball and hockey. I’ve never interviewed a hockey player, but I’m told they are universally humble and friendly to the press.)

Maybe it’s because baseball requires so many games and failure is so much a regular part of the sport. Or maybe it’s because in any given play, more than half of your teammates are uninvolved, making players self-absorbed. All I know is that it was a struggle to get guys to say anything other than the stock phrases from the “boring quotes” scene in Bull Durham.

But in one game I got such great comments that I’ve saved the tape. (What? Yeah, tape. It was a long time ago, okay?)

I was covering the first game of a series between the Richmond Braves and the Indianapolis Indians for the Richmond Times-Dispatch. I’d never met the new Braves manager, a man named Jeff Cox. Midway through the game, Indians beat writer Kim Rogers turned to me and said, “Hey, are you talking to Cox after the game?”. I said I probably would.

“Man, that guy’s crazy. You better hope they win.”

Kim told me a story from when Cox managed the Omaha Royals and the Indians were in their old ballpark on 16th street. He said that one of the Royals hit a groundball to short that tipped off the fielder’s glove and went into the outfield grass. The official scorer ruled it a base hit, but, as sometimes happens, people in the press box argued that the fielder should have made the play. After some discussion, the scorer agreed and changed the call to an error. Immediately after the scoring change was announced, a heavy rain started to fall and the umpire called a halt to play.

Moments later, the writers and scorer heard somebody running up the ramp to the press box, yelling and cursing. Cox burst in and started screaming at Rogers in the belief that he was the official scorer. After yelling for a few minutes, he walked back down to the dugout.

Now, it’s not unheard of for a manager or coach to call up to the press box to argue about a scoring call after the game. Players’ livelihoods are often at stake, and a base hit for a batter or removal of an earned run for a pitcher can sometimes – at least temporarily – tilt a decision on release. But you don’t charge into the press box, and you don’t verbally attack a game official.

Rogers told me that at the park the next day, Cox found him and apologized. He said the kid had been hitting the ball hard, finally got one to fall in, and he felt like the scorer was endangering a career. Kim told him he harbored no hard feelings. But somebody from the Indians had complained to the Royals, and Cox was later suspended and then let go before the following season. Rogers said during the next summer, he heard Cox was in a traffic accident in California and got in a fight with a much younger and larger person, and ended up in a hospital for a few months.

Late in this game, Richmond was ahead by a couple of runs so I thought maybe Cox would be in a decent mood for post-game comments. But Indianapolis put a couple of runners on, and the next batter grounded a ball up the first base line that got past first baseman Randall Simon. The umpire started to call the ball foul, then suddenly pivoted and pointed to fair territory, scoring two runs to put Indianapolis ahead. That ended up closing the scoring, and the Braves lost by a single run.

After the last out, I waited the full league-mandated ten minutes before entering the clubhouse. If I was going to get screamed at, I wanted to make sure I’d scrupulously observed the “cooling off period” before press are allowed to enter. I tentatively opened the door and the first person I saw was Cox.  I asked him if he had any comments, and  he said “Sure, let’s go out to the dugout. It’ll be a little quieter.” 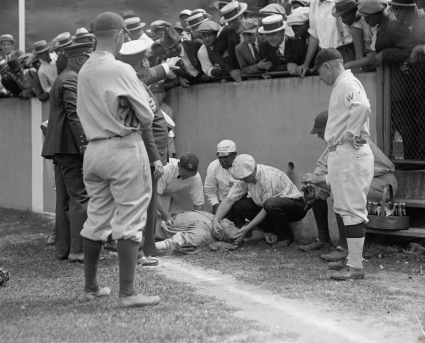 I fed him a few softball questions, and he was friendly, calm and amiable. Not at all what I expected. I started thinking maybe Rogers was just messing with me. As usual, I’d saved the most sensitive question for the end.

“In the eighth inning on that grounder up the first base line, it looked like the umpire started to call it foul, then called it fair. Did you have a good look at the play?”

He sighed. “No, I didn’t,” he said. “I’m sure he got it right….you know, we’re all in this together, just trying to get better and trying to develop these kids for the major leagues…”

He went on like that for several minutes, and gradually veered into a lucid, insightful, fascinating monologue about the beauty and meanness of baseball, how it seems like a simple game but tiny adjustments – or failures to adjust –  can have such a huge impact on the results.

But then he got around to the specific play. He wasn’t mad at the umpire, but the more he talked the angrier he got at the first baseman. Simon had failed to guard the line like he’d been told, apparently not for the first time. Cox’s voice kept getting louder, and he started pacing the dugout, shaking his head, the words coming in staccato bursts. The bat boys started watching him warily as they gathered up the equipment.

Finally he said, “We’ve been over it and over it, and OVER IT with this guy AND I DON’T KNOW WHAT you have to say to him, so I DON’T KNOW, you just do the BEST YOU CAN and HOPE he gets better…..SONOFABITCH!!”

With that, Cox wheeled around and headed up the tunnel to the clubhouse. SOMEBODY was getting an ass-chewing. And I had some quotes for the story.

Every time I saw Cox after that, he was the same friendly, upbeat, mild mannered guy he was when he first started talking. (‘Course, by then Randall Simon was on to bigger things. Like being the object of racial taunts by Atlanta’s John Rocker and, eventually, tripping one of the Milwaukee Brewers’ racing sausages with a bat.) Cox quickly became my favorite manager in the International League. One time he even took me with him into the training room so I could watch as he told a player he was going up to the major leagues.

I guess that’s baseball, huh? If it can make a sweetheart like Jeff Cox go off the rails, it’s enough to make anybody crazy.