For the twelfth year in a row, the Fear and Loathing A.C. Fantasy Football League traveled to Vegas on the first weekend of March Madness for spring practice.

Most of the itinerary is repeated from year to year, but since Vegas is always changing –  casinos close and new ones open –  it’s never exactly the same. And we always wander off the beaten path a time or two, especially when Purdue, Notre Dame, or Indiana games require our attention.

As usual, we made time for breakfast at Hash House A-Go-Go at the Linq casino. The Linq has been there for a long time but suffered two name changes since we’ve been going there. First it was Imperial Palace (Chinese theme), then for a year or two “The Quad” (frat house chic?), and finally “The Linq”. It’s Gan’s favorite casino, and he gets us a good rate there for at least a few weeknights.

Hash House is a chain based in California, but apparently the owners are Hoosiers. There are a lot of Indiana farm references in the menu, and they serve huge portions for breakfast. Waffles the size of platters, Bloody Marys in 24 oz, glasses. But it’s all high quality and very tasty. 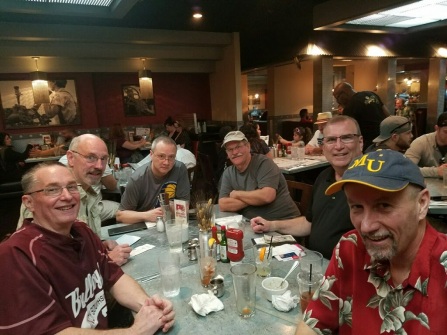 This year (well, maybe every year) we were making a lot of noise at our table, insulting each other, arguing about basketball bets and generally enjoying our first morning in Vegas. A middle-aged woman sitting at the next table over asked if she could take our picture because she’d never seen a bunch of grown men having so much fun. (She’s apparently never seen Dads escorting an eighth grade class to laser tag.) It was a little awkward, but we agreed and she texted us a copy.

She then pointed out her son who was cringing at their table. She explained that she brought him to Vegas for his 21st birthday. We all told him happy birthday while pondering what a mixed blessing this would be. BEING IN VEGAS FOR YOUR 21ST BIRTHDAY…..uh…….with your Mom. Gan wondered if she would at some point send him out with a hundred dollar bill to “become a man” while she played nickel slots.

There have been a couple of big changes since we last visited. Binion’s poker room has closed, though they still have two tables open at the end of the table games pit. Binions is where the World Series of Poker started, and until a few years ago the room was always busy.

In one of our earliest trips, the casino had a huge room devoted to a sports book on the first floor. After the casino was sold by the Binion family, the new owner converted the book to a bar/entertainment area with a mechanical bull. Shortly after that, they renovated and created a beautiful enclosed poker room in the space, with portraits of Poker Hall of Fame members on the wall.

But every time I walked past it, the room was either completely empty or had only a single table open. Tournaments were still held off the casino floor, but cash games have been dead at Binion’s since the renovation. Keeping just a couple of tables shoved into a corner of the pit does not bode well for poker at the old casino. After they close that, the only downtown poker room will be at the Golden Nugget.

Meanwhile, The Lucky Dragon casino opened a block off the strip in early March. On a Sunday afternoon we walked in to check the place out and use some introductory free play.

The casino is geared toward Chinese visitors, with all of the signage in Chinese over English subtitles. They have a lot of baccarat tables with no craps, sports book, or poker and only a couple of blackjack stations. It’s an elegant, quiet casino, and I saw one player being served a pot of tea while playing mini-baccarat. In other words, we won’t be spending a lot of time there.

Gan is part Chinese and pretended to be able to read all of the signs. He lost some credibility when he ordered Jameson and 7 in his “impeccable” Mandarin, and the waiter brought him a dozen egg rolls.

A lot of the strip casinos have imposed a new system for complimentary drinks at the bar for video poker players. As I’ve written before, when the sports books are crowded we often sit at the bar, slowly playing video poker and soaking up free cocktails while we watch the games on TV. The bigger strip conglomerates now meter video poker play at the bar and only comp your drink if you’ve played enough money through. We didn’t play much at strip casino bars, but there was no noticeable delay in getting cocktails wherever we were. In a couple of instances at the Cromwell, the server was offering drinks before we were done with the prior one. 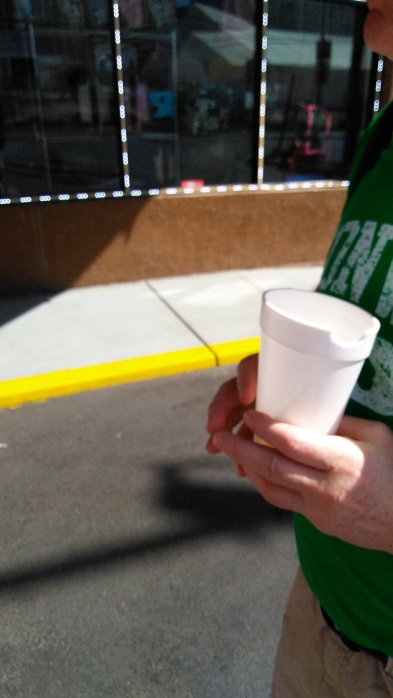 Sometimes we get hungry between buffets

As usual, at the end of the trip I tallied up my gambling wins and losses. I surprisingly  found a small profit, mostly on the strength of video poker and three card poker at the Cromwell. We played a lot more limit poker than usual, and that helped as well. Having been home for a few weeks now, we’re starting to look for ways to justify an autumn trip. I’m still working on a plausible argument to convince Theresa that I can make it as a professional sports bettor. Unfortunately, she’s good at math.