I used to be a University of Louisville fan.

Growing up, I cheered for Kentucky and Louisville more or less equally. I watched Wes Unseld muscle his way around in the post and Terry Howard methodically hit free throws. I rooted for Dan Issel and Mike Pratt as they dominated the toothless Southeastern Conference. I fell asleep in the grainy glow of a small black and white TV in my room listening to Cawood Ledford and John Tong. As a twelve-year old, I attended the Rupp-Issel-Pratt basketball camp, an extravagant Christmas gift from my parents.

(Dan Issel told me “good rebound” once. This was, sadly, the apex of my basketball career.)

But somewhere along the line in high school, I started resenting the superior, dismissive attitude of UK fans toward U of L. Sure, Kentucky had won national championships, and UL was only a few years removed from life as a small, municipal college. But by the time I entered as a freshman in 1976, we (UL was we by then) had made it to two final fours under Denny Crum, and everybody else in the country considered the Cardinals a basketball power.

Not only did UK fans not share that opinion, the school refused to even schedule us. The “little brother” BS reached its zenith under the brief (though eventful) tenure of Eddie “I’d crawl to Lexington for the UK job” Sutton. Like most UL fans at the time, I thought we held the moral high ground over UK. The Wildcats seemed to periodically run afoul of the NCAA on a Halley’s Comet type schedule, and Denny Crum’s program and reputation remained unsullied.

By the time I got to college, I was a rabid fan and ardent UK-hater. I sat in the rain in 1977 and watched UL beat Indiana State in front of only about 5,000 fans to clinch their first bowl berth since 1970. I sat in a raucous, sweaty Red Barn in 1980 as the Cards clinched a sweet sixteen appearance, and we all chanted “Bring on the Cats!” (who folded to Duke five days later, thereby avoiding a “dream game”. In 1983, UK could no longer duck us when we were pitted in the NCAA tournament. I watched in our apartment in Terre Haute, Indiana, with equal parts joy (when we surged to the lead) and nausea (whenever UK made a run). I was completely spent emotionally by the time Milt “Iceman” Wagner and the McCray brothers got us the 80-68 overtime win.

I can’t claim the bonds to my alma mater weren’t loosened when we moved to Indiana. But they frayed further when AD Tom Jurich hired Rick Pitino to replace Denny Crum. Besides the whiff of scandal that seemed to follow in his wake and his obnoxious East Coast attitude, the worst part was that he’d coached at UK. The rumor was that Jurich had actually forced out Denny Crum – two-time NCAA championship winner –  for this guy, a UK guy, for cryin’ out loud.

So with two kids (and eventually three) headed to Indiana University, I started rooting the Hoosiers. (It helped that Bobby Knight left.) I kept my allegiance to UL football, and all other sports; but I decided I couldn’t support them in basketball until that man left.

Then things went from bad to worse. First, there was Pitino’s sordid affair involving public sex and blackmail. Then Jurich hired Bobby Petrino, who was lugging his own tawdry baggage that included quitting an NFL job in mid-season and wrecking a motorcycle while out for a ride with his mistress – whom he’d hired in to his school’s athletic department. Then, in quick succession, Pitino’s sex-parties-for-recruits scandal and Petrino’s acceptance of Wake Forest game planning data from a disgruntled ex-coach. Both Pitino and Petrino denied any knowledge of the goings-on, of course. But when two noted control freaks don’t know something about their programs, it’s because they don’t wanna know.

I’ve been calling for the university to clean house and fire Jurich for years.I don’t donate to the University, so I’m sure my opinion is immaterial to them. But it feels like my old school has become the current version of UNLV in the 1990’s. All we need is a point-shaving scandal or photos of players in a hot tub with a mobbed-up gambler. 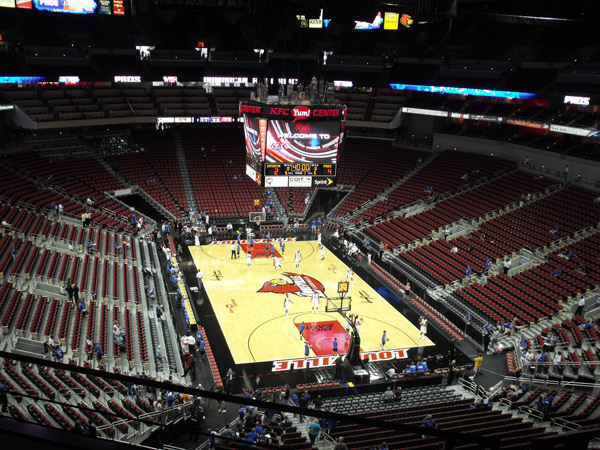