A pitcher warms up in the left field bullpen at Bob Warn Field  on a hot summer evening, but there’s little urgency. The bullpen catcher for the Terre Haute REX makes sure he knows he’s not getting in the game any time soon. Their teammates on the field are taking on the Butler Bluesox in a late-season game in the Prospect League, a summer “wood bat” league for college baseball players.

“They just want you to get loose. In case he starts having trouble,” the catcher says, as he paces around the bullpen. 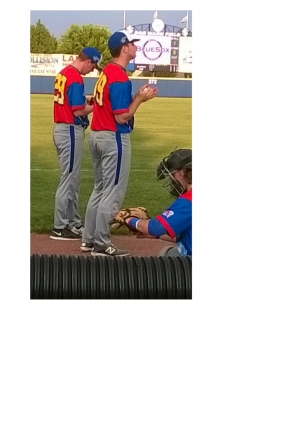 There’s a little blond kid, maybe three years old, playing in the dirt beside the chain-link fence next to the bullpen. He’s wearing an Indiana State Sycamores T-shirt, and his dad sits on the wooden picnic table watching him and keeping an eye on the game. The boy starts to toss gravel through the fence. The rocks make it only a few inches inside the chain link, but it’s the kind of thing a parent has to de-escalate. Nip it in the bud. The boy gets a couple of warnings, but then his dad scoops him up and walks off, promising ice cream.

In dozens of leagues across the country, college baseball players extend their season by playing in the summer. College teams use aluminum bats, but in the summer collegiate leagues, players wield wooden bats to prepare for the next level. The Prospect League has been around since 2008, and includes teams from Indiana, Illinois, Ohio, Missouri, Pennsylvania, and West Virginia.

When I first read about Terre Haute’s team, I thought maybe the REX name was a reach for a play on words, trying to draw young fans with a Tyrannosaurus Rex tie-in. But the website has no dinosaur- themed merch or other reference to pre-history.

Bruce Rosselli is part-owner and general manager of the REX.  “Clabber Girl got the naming rights when the team started”, Rosselli said. “They have a brand of coffee named ‘REX’, that’s why we don’t have a dinosaur mascot. They didn’t want their product associated with a dinosaur.”

I got the impression that Rosselli thought it might be easier to market a team with a dinosaur mascot, rather than one related to a brand of coffee sold only within 20 miles of the Wabash River.

And – make no mistake – Rosselli has to spend a lot of his waking hours in marketing. It might seem to be a letdown for a successful athlete to make a living in sales. But, for Rosselli, sales and sports have been intertwined for a long time.

After competing in track and field at Indiana State, Rosselli rose to the highest levels of a different sport. A member of two world championship bobsledding teams, he competed in five Olympic trials and was the alternate driver for the U.S. teams in 1994, 1998, and 2002.

But as an elite level bobsledder from Indiana, his career required marketing. A lot of marketing.

Rosselli approaches cutting costs and improving team operations with as much passion as he did his athletic career. Named general manager in 2014, he negotiated contracts with national sponsors for bats and bus travel to cut costs. The team officially uses Titan wood bats and sports uniforms from Adidias, and the field is adorned with new signage from other sponsors.

Rosselli doesn’t have to pay his players; it’d be a violation of NCAA rules. The most he can give them is meal money and hotel rooms when they’re on the road. But other people have to be paid, and operating expenses have to be met. The REX draw about 30,000 fans per season in the abbreviated, June-early August schedule. But a ticket is only five bucks, and concession prices are closer to flea market level than major league baseball.

A professional team may be able to rely on ticket sales and TV revenue to pay the bills. But the REX depend on the support of the local business community, and Rosselli has to come up with new ideas and approaches to get a share of local and regional advertising budgets. Getting the big apparel companies on board is key, but Rosselli has to run down revenue at the local level, as well.

“In 2014, when we (the current ownership group) took over, I had to go out to all of the sponsors and tell them ‘We can’t sustain the team at the same sponsorship level (as in prior years).’ The sponsors were all grateful that we kept the team in Terre Haute, and 85-90% percent of those companies stepped up.”

On this night, The REX are dressed in blue, red and yellow uniforms as part of a super-hero promotion. The jerseys will be auctioned off on the following night, but fans have multiple opportunities over the course of the season to get free stuff.

“Last year I gave away eighteen bikes, two grills, and two flat screen TVs,” Rosselli said. “I can give a sponsor a bike giveaway, let them set up a promotional table, and let the first 500 kids in free, for $1,150.

“I buy the bike, but I have an agreement with Academy Sports and can get them at a discount. The company also gets a quarter-page ad, so that’s a low-cost sponsorship.”

On the field, free bikes and apparel costs aren’t the primary focus. For the hitters, using a wood bat is sometimes a painful adjustment. REX pitcher Eric Sexton is understandably delighted to face hitters with lesser tools. A fastball hit off an aluminum bat comes back to the pitcher a lot faster, even if it’s not hit squarely. A ball that might be rifled up the middle off a metal bat gets fouled off the hitters shin with wood.

Sexton chuckles thinking about it. “Oh, that’s beautiful,” he says. “Hitters definitely have to square up a little more, and, as a pitcher, you get away with a lot more. It’s awesome.

“But these guys are all good hitters, and by then end of the summer they’re used to it.”

The players live with volunteer host families during the season. I ask Sexton whether it’s awkward for a college student to move in with a family in a town he’s never seen before. He grew up in Indianapolis before moving to Florida in high school. Though he’d never lived in Terre Haute, he had at least been here before.

“I played with Ethan Larrison when I was twelve or thirteen, and we’ve stayed in touch. He played for the REX last year, and when I came back to visit family in Indy, I came over to Terre Haute and caught a game last summer. So I decided this would be a good place to play summer ball.

“I’m staying with the same family that Ethan did last year, so it’s been a little easier on me. We started out with a mutual friend (in Ethan), so that made it a little easier.”

The REX may be wearing superman jerseys, but the Bluesox apparently have a bat-supply deal with Kryptonite Industries, and they drill the REX by a score of 20-5. Despite the disappointing result, the crowd seems to enjoy the game. The PA announcer keeps confusing the prior night’s bike promotion with tonight’s back-to-school focus, and the crowd blows him crap in good-natured way. Parents walk around with little kids, trying to manage concession stand costs just like Rosselli does with travel and equipment. Some of the fans in premium seating (twelve bucks) start yelling at players about errors, but then switch to positive reinforcement (“Let’s go REX! Let’s go REX!”)

As the game ends, families and couples file out into the dark, warm night. The Prospect League season is almost over, soon to be followed by the start of football and the first cool days of autumn in Indiana. In a few days, the players will pack up, say goodbye to their host families, and go back to being college students. The little boy is asleep on his dad’s shoulder, head bobbing with every step on the gravel parking lot. Maybe he’s dreaming about baseball. But my money would be on ice cream. 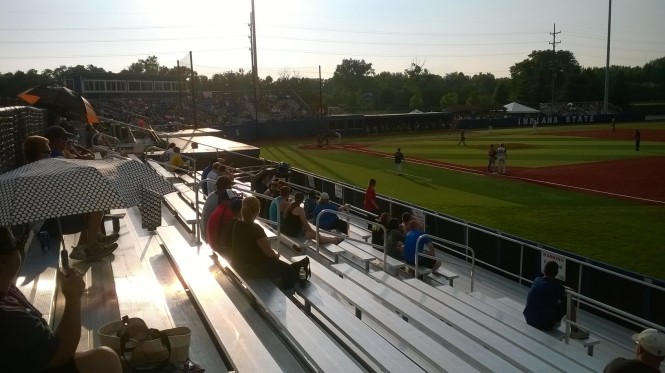